skip to main | skip to sidebar

Notes from the British General Assembly 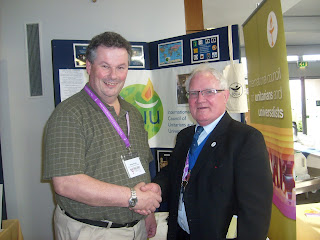 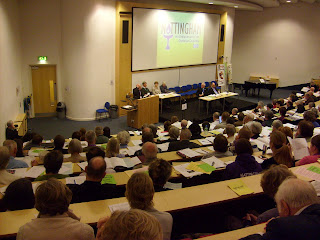 Nottingham, England, April 10. It has been a great privilege for me to be a guest of the British General Assembly this year at their Annual Meetings. And even greater privilege was an invitation from the Ministerial Fellowship to give the annual John Relly Beard lecture. My topic was “The Center and the Circle: The Challenge of International Ministry”. My lecture made two points. The first is that we are not a single global faith, but a collection of indigenous liberal religious responses shaped by local history and context. The second concerned the wide variety of understandings of the word ‘ministry. With such variation among us in educational opportunities and local need means there is no one definition of ministry. The upcoming minister’s conference in the Netherlands in July will be a first attempt to discuss these mutual concerns on a global scale.

I am pleased to announce that I will be presenting this lecture again as the ICUU’s first ever “Webinar” within the next few weeks. There will be a live broadcast over the Internet, but the broadcast will be archived and available to anyone at their convenience. It’s completely free and only requires a good Internet connection. Executive Secretary Steve Dick will be sending out notice and access information in the near future.

The British GA meetings.
Although we can read about how each group does their business, there is nothing quite like visiting another national group’s meetings. The UK Unitarians have been unfailingly gracious and welcoming to me. It has been especially interesting for me as a Canadian. Our meetings are about the same size (about 400 people). And while many issues facing the GA and the Canadian Unitarian Council are the same, the solutions and approaches are quite different. Again this is a reflection of the differences between the cultural contexts and the history of each organization.

Several hundred Unitarians are gathered on the beautiful campus of the University of Nottingham. Designed to be environmentally gentle, the wood covered buildings are set amidst ponds and marshes and wild water birds. The buildings are light and airy making the setting a real pleasure. They have fed us very well, too!

The meetings run from Thursday afternoon through Sunday lunch. There are business meetings in the mornings where the delegates on the Assembly receive reports and debate motions concerning justice issues and essential business. This year the meetings have also included delightful audio-visual looks at a handful of congregations around the UK, personal views created by the congregations themselves.

Afternoons are filled with workshops by various standing committees on topics like Worship, the historical society, the ministerial committee and various spiritual and justice topics. I am looking forward to participating in a labyrinth walk later today, a favorite spiritual activity for me.
Evening programs included the Anniversary Service celebrating ministry and a social night. I am told there will be a Beatles tribute band at tonight’s affair!

During the business meetings, we were also introduced to some of the exceptional web work being done by James Barry. He has redesigned and simplified the General Assembly’s website, but has also created an easy way for UK congregations to setup and maintain their local sites simply and easily. We are exploring the possibility with the BGA to see if some of that skill and talent can be used by ICUU member groups.

The largest issue facing the BGA at this time seems to be one of direction. As with most national groups, money is a concern as is membership numbers in local congregations. The meetings started with the Executive presenting a document called ‘Difficult Decisions’ in which they laid out a shopping list of services that would cost an additional £140,000. Delegates were invited into an extended consultation on which should be priorities and how the money should be raised. As I write, no decision has been taken, but it will be interesting to see what options our UK co-religionists choose to do.
Posted by Brian Kiely at 09:50